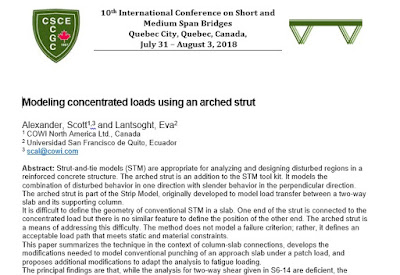 In 2018, I was co-author of two papers on the topic of the arched strut – both were presented by my colleague Dr. Alexander.

The first paper, presented at the conference on Short and Medium Span Bridges in Quebec City, looks at the use of the arched strut for approach slabs of bridges and considers the effect of fatigue. The abstract is as follows:

Strut-and-tie models (STM) are appropriate for analyzing and designing disturbed regions in a reinforced concrete structure. The arched strut is an addition to the STM tool kit. It models the combination of disturbed behavior in one direction with slender behavior in the perpendicular direction. The arched strut is part of the Strip Model, originally developed to model load transfer between a two-way slab and its supporting column.
It is difficult to define the geometry of conventional STM in a slab. One end of the strut is connected to the concentrated load but there is no similar feature to define the position of the other end. The arched strut is a means of addressing this difficulty. The method does not model a failure criterion; rather, it defines an acceptable load path that meets static and material constraints.
This paper summarizes the technique in the context of column-slab connections, develops the modifications needed to model conventional punching of an approach slab under a patch load, and proposes additional modifications to adapt the analysis to fatigue loading.
The principal findings are that, while the analysis for two-way shear given in S6-14 are deficient, the punching strength of a typical approach slab under both static and fatigue loading from a CL-W truck should not be a concern. 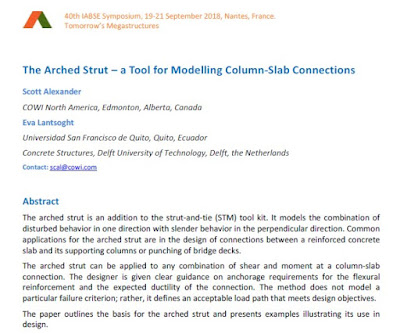 The second paper, presented at IABSE Nantes in September 2018, describes the arched strut from a more general perspective and shows how the arched strut can be used as a tool in the strut-and-tie models toolkit. The abstract is as follows:

The arched strut is an addition to the strut-and-tie (STM) tool kit. It models the combination of disturbed behavior in one direction with slender behavior in the perpendicular direction. Common applications for the arched strut are in the design of connections between a reinforced concrete slab and its supporting columns or punching of bridge decks.
The arched strut can be applied to any combination of shear and moment at a column-slab connection. The designer is given clear guidance on anchorage requirements for the flexural reinforcement and the expected ductility of the connection. The method does not model a particular failure criterion; rather, it defines an acceptable load path that meets design objectives.
The paper outlines the basis for the arched strut and presents examples illustrating its use in design.

6 Essential Elements in Writing To Dos

In a not-so-recent Lifehacker post, I read the rather surprising…

The past two weeks and today, I've been continuously working…