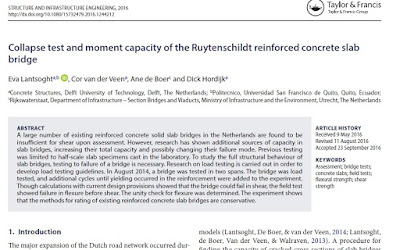 We recently published a paper in Structure and Infrastructure Engineering about the collapse test on the Ruytenschildt Bridge and the implications for the flexural assessment of reinforced concrete slab bridges.

A large number of existing reinforced concrete solid slab bridges in the Netherlands are found to be insufficient for shear upon assessment. However, research has shown additional sources of capacity in slab bridges, increasing their total capacity and possibly changing their failure mode. Previous testing was limited to half-scale slab specimens cast in the laboratory. To study the full structural behaviour of slab bridges, testing to failure of a bridge is necessary. Research on load testing is carried out in order to develop load testing guidelines. In August 2014, a bridge was tested in two spans. The bridge was load tested, and additional cycles until yielding occurred in the reinforcement were added to the experiment. Though calculations with current design provisions showed that the bridge could fail in shear, the field test showed failure in flexure before shear. The unity check for flexure was determined. The experiment shows that the methods for rating of existing reinforced concrete slab bridges are conservative.

Why consuming sugar is a bad idea

I used to haul a big package of cookies and…

Today I have the pleasure of inviting Amber Davis once…

I am John-Alan Pascoe and This is How I Work

Today, I am inviting John-Alan Pascoe in the "How I…