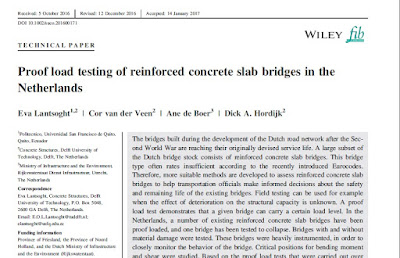 We recently published our second paper in Structural Concrete, the journal of fib (the international concrete federation). You can find the paper online here.

The bridges built during the development of the Dutch road network after the Second World War are reaching their originally devised service life. A large subset of the Dutch bridge stock consists of reinforced concrete slab bridges. This bridge type often rates insufficient according to the recently introduced Eurocodes. Therefore, more suitable methods are developed to assess reinforced concrete slab bridges to help transportation officials make informed decisions about the safety and remaining life of the existing bridges. Field testing can be used for example when the effect of deterioration on the structural capacity is unknown. A proof load test demonstrates that a given bridge can carry a certain load level. In the Netherlands, a number of existing reinforced concrete slab bridges have been proof loaded, and one bridge has been tested to collapse. Bridges with and without material damage were tested. These bridges were heavily instrumented, in order to closely monitor the behavior of the bridge. Critical positions for bending moment and shear were studied. Based on the proof load tests that were carried out over the past years, a set of recommendations for the systematic preparation, execution, and analysis of proof load test results is compiled. These recommendations will ultimately form the basis of the guideline for proof load testing for the Netherlands, which is currently under development.

Silver Linings: Resources for yoga on the go

When you are traveling for conferences, having a very busy…

I recently presented in a technical session of the International…

Do you use Slideshare already?If you answers this with "no",…