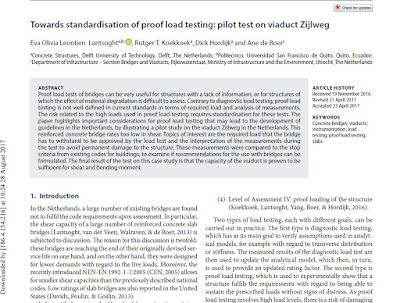 The abstract is as follows:

Proof load tests of bridges can be very useful for structures with a lack of information, or for structures of which the effect of material degradation is difficult to assess. Contrary to diagnostic load testing, proof load testing is not well-defined in current standards in terms of required load and analysis of measurements. The risk related to the high loads used in proof load testing requires standardisation for these tests. The paper highlights important considerations for proof load testing that may lead to the development of guidelines in the Netherlands, by illustrating a pilot study on the viaduct Zijlweg in the Netherlands. This reinforced concrete bridge rates too low in shear. Topics of interest are the required load that the bridge has to withstand to be approved by the load test and the interpretation of the measurements during the test to avoid permanent damage to the structure. These measurements were compared to the stop criteria from existing codes for buildings, to examine if recommendations for the use with bridges can be formulated. The final result of the test on this case study is that the capacity of the viaduct is proven to be sufficient for shear and bending moment.

Five ways to jumpstart your day

For a PhD student, I am quite an early bird.…

6 Essential Elements in Writing To Dos

In a not-so-recent Lifehacker post, I read the rather surprising…

Why consuming sugar is a bad idea

I used to haul a big package of cookies and…