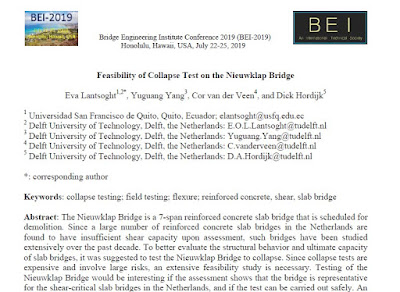 My colleagues and I published a paper in the BEI (Bridge Engineering Institute) Conference proceedings. In the end, none of us could make the trip to the conference, even though I had originally co-organized a mini symposium in this conference about field testing. I couldn’t figure out childcare, my colleague didn’t receive his visa, so in the end we couldn’t give our presentation.

Nevertheless, here is the abstract of our paper:

The Nieuwklap Bridge is a 7-span reinforced concrete slab bridge that is scheduled for demolition. Since a large number of reinforced concrete slab bridges in the Netherlands are found to have insufficient shear capacity upon assessment, such bridges have been studied extensively over the past decade. To better evaluate the structural behavior and ultimate capacity of slab bridges, it was suggested to test the Nieuwklap Bridge to collapse. Since collapse tests are expensive and involve large risks, an extensive feasibility study is necessary. Testing of the Nieuwklap Bridge would be interesting if the assessment shows that the bridge is representative for the shear-critical slab bridges in the Netherlands, and if the test can be carried out safely. An assessment of the bridge in an end span and middle span at two levels of approximation is carried out, and the maximum load required to cause collapse is estimated. The outcome of the feasibility study is that the required loads for collapse are large when a plasticity-based model is used. Furthermore, the Nieuwklap Bridge is not shear-critical and thus not representative of the shear-critical slab bridges in the Netherlands. As such, collapse testing is recommended against.

As part of the MIT Medialab Course on Learning Creative…

Ten things I miss about Europe

As a follow-up of the list of ten things I…

In defense of Latin in secondary schools

After reading some thoughts on the upcoming reforms in the…