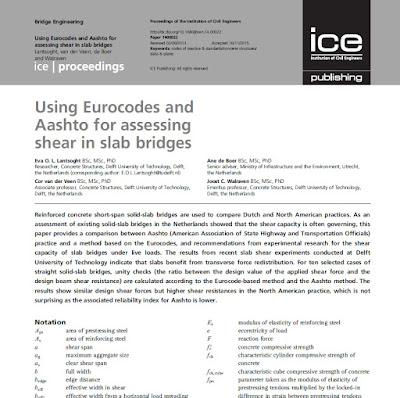 We’ve recently published a paper in the Proceedings of the Institution of Civil Engineers – Bridge Engineering. You can find this paper online. The abstract is as follows:

Reinforced concrete short-span solid-slab bridges are used to compare Dutch and North American practices. As an assessment of existing solid-slab bridges in the Netherlands showed that the shear capacity is often governing, this paper provides a comparison between Aashto (American Association of State Highway and Transportation Officials) practice and a method based on the Eurocodes, and recommendations from experimental research for the shear capacity of slab bridges under live loads. The results from recent slab shear experiments conducted at Delft University of Technology indicate that slabs benefit from transverse force redistribution. For ten selected cases of straight solid-slab bridges, unity checks (the ratio between the design value of the applied shear force and the
design beam shear resistance) are calculated according to the Eurocode-based method and the Aashto method. The results show similar design shear forces but higher shear resistances in the North American practice, which is not surprising as the associated reliability index for Aashto is lower.

How to write an abstract in 30 minutes

Have you ever been in the following situation?You have selected…

PhD Talk for AcademicTransfer: How to select which conference to attend

This post is part of the series PhD Talk for…

Applications of sound in engineering

Some time ago, I gave a short presentation about the…