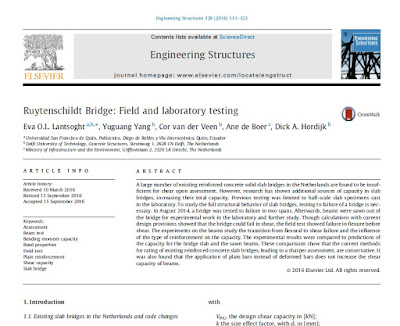 We recently published a paper on the field and laboratory testing of the Ruytenschildt Bridge. This bridge was tested to failure in two spans, and then beams sawn from the bridge were tested in the lab to study the behavior further.

A large number of existing reinforced concrete solid slab bridges in the Netherlands are found to be insufficient for shear upon assessment. However, research has shown additional sources of capacity in slab bridges, increasing their total capacity. Previous testing was limited to half-scale slab specimens cast in the laboratory. To study the full structural behavior of slab bridges, testing to failure of a bridge is necessary. In August 2014, a bridge was tested to failure in two spans. Afterwards, beams were sawn out of the bridge for experimental work in the laboratory and further study. Though calculations with current design provisions showed that the bridge could fail in shear, the field test showed failure in flexure before shear. The experiments on the beams study the transition from flexural to shear failure and the influence of the type of reinforcement on the capacity. The experimental results were compared to predictions of
the capacity for the bridge slab and the sawn beams. These comparisons show that the current methods for rating of existing reinforced concrete slab bridges, leading to a sharper assessment, are conservative. It was also found that the application of plain bars instead of deformed bars does not increase the shear
capacity of beams.

You can download the paper for free until November 12th 2016 via this link.

For some of us, our morning routine includes nothing more…

Getting a job, after the PhD

At the risk of landing in a bed of nettles,…

When I went for my PhD Start-Up training course, I…