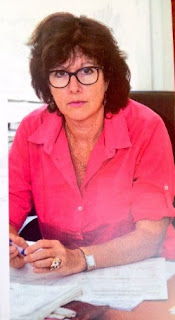 Today, I have invited Veronique to share her experiences of her graduate school defenses. She is a medical doctor with two specialties, Oncology and Haematology. She was also trained in molecular biology and microbiology. She worked for 12 years in a public hospital, managing a day care Oncology unit. She is now a consultant in private practice, working mainly in haematological diseases and gynecologic oncology.

I defended two thesis, one MD, one PhD.

The MD was defended first. I studied on a new treatment given to 80 patients with a subset of a particular form of lymphoma. I had to write the history of this lymphoma, a review of regular treatments, then explain the study, then write a discussion. The thesis was around 80 pages. The jury was chosen within my former bosses at the hospital, most of them also teaching at University. Everything was written and organised over a span of six months.

The defense was held at the University. It was very formal. The jury and I wore black long dresses with white collars. I invited my family and friends. I had to stand in front of the jury, read the introduction and the conclusion of my thesis. Then I sat down and listened to every member of the jury commenting and complimenting. There were no critics – they wouldn’t let you defend if they thought it wasn’t good enough.

Then the jury went away for like 15 minuts and came back with their decision. They gave me my MD, with honors, and proposed my thesis for a uni award. I then had to read the oath of Hippocrates. Then there were congratulations all around, the jury went away, and we went to eat and drink. The entire ceremony lasted around one hour and a half.

The PhD defense was very different. I had been working on it for three years. Two years were devoted to lab work, then I spent one year writing it while back into clinical practice. It had to feature at least three papers accepted in peer-reviewed journals. I sent chapters to my director for her to read all along. The thesis was around 300 pages, containing published and unpublished work.

The jury was chosen by me and my director, including researchers from my lab and uni, but also foreign researchers I worked with on papers (one Dutch, one Italian), and a national referent on my specialty (cytogenetics in leukemia).

The defense was held in my lab. No formal wear and no family nor friends, but all the people from the lab. I had to present my work in a Powerpoint (about 30 minutes). Then there was a lengthy discussion between the members of the jury, including critics. They went away for a while (around 20 minutes) then came back saying that my work had be accepted with honors. At the end, we all went to drink after a round of applause.

Share with your peers!
defenseguest postPhD Defenses around the world
Related Posts

PhD Defenses around the world: a defense in Sweden

Today, in the series of "Defenses around the world", I…

PhD Defenses around the world: a defense from the University of Charleston

Today, Dr. Philip Shields shares his experience of the PhD…

PhD Talk for AcademicTransfer: How to set goals and resolutions for the New Year

This post is part of the series PhD Talk for…