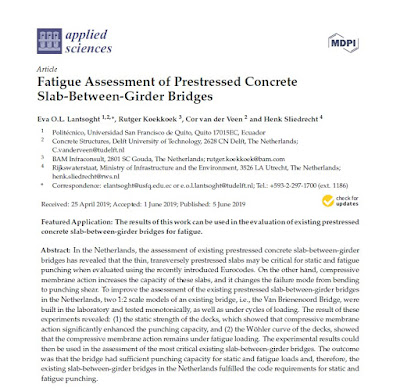 My colleagues and I recently published a paper in Applied Sciences, Special Issue Fatigue and Fracture of Non-metallic Materials and Structures titled “Fatigue Assessment of Prestressed Concrete Slab-Between-Girder Bridges”.

This paper is the last journal paper in the suite of papers that deal with fatigue in slab-between-girder bridges. In this paper, we went one step further than in the previous ones, which dealt with the experiments only. Here, we developed a method to assess existing slab-between-girder bridges based on the experimental results. It’s a rather practical and practice-oriented paper.

The abstract is:
In the Netherlands, the assessment of existing prestressed concrete slab-between-girder bridges has revealed that the thin, transversely prestressed slabs may be critical for static and fatigue punching when evaluated using the recently introduced Eurocodes. On the other hand, compressive membrane action increases the capacity of these slabs, and it changes the failure mode from bending to punching shear. To improve the assessment of the existing prestressed slab-between-girder bridges in the Netherlands, two 1:2 scale models of an existing bridge, i.e., the Van Brienenoord Bridge, were built in the laboratory and tested monotonically, as well as under cycles of loading. The result of these experiments revealed: (1) the static strength of the decks, which showed that compressive membrane action significantly enhanced the punching capacity, and (2) the Wöhler curve of the decks, showed that the compressive membrane action remains under fatigue loading. The experimental results could then be used in the assessment of the most critical existing slab-between-girder bridges. The outcome was that the bridge had sufficient punching capacity for static and fatigue loads and, therefore, the existing slab-between-girder bridges in the Netherlands fulfilled the code requirements for static and fatigue punching.

Thesis by dissertation or publication?

I recently ran a poll on Twitter to ask if…

I am Michelle Thompson and This is How I Work

Today, I am interviewing Michelle Thompson for the "How I…

Paper nominated for paper of the year!