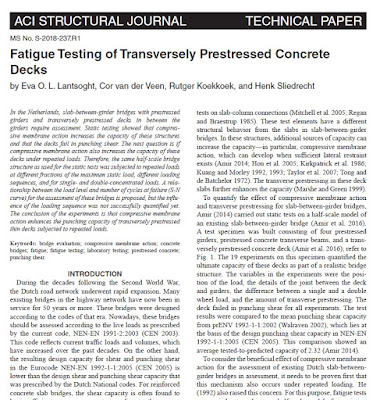 My collaborators and I recently published two papers related to the topic of fatigue in slab-between-girder bridges. These paper are published in the ACI Structural Journal, Vol 116 nr 4. The two papers deal with two series of experiments: the first series had transversely prestressed decks between prestressed T-girders, and the second series had transversely prestressed decks between inverted T-girders / bulb T-girders. I worked on part of the analysis of the test results, and reporting the results in journal papers during the summer of 2018.

The abstract of the first paper is:
In the Netherlands, slab-between-girder bridges with prestressed girders and transversely prestressed decks in between the girders require assessment. Static testing showed that compressive membrane action increases the capacity of these structures and that the decks fail in punching shear. The next question is if compressive membrane action also increases the capacity of these decks under repeated loads. Therefore, the same half-scale bridge structure as used for the static tests was subjected to repeated loads at different fractions of the maximum static load, different loading sequences, and for single and double concentrated loads. A relationship between the load level and number of cycles at failure (S-N curve) for the assessment of these bridges is proposed, but the influence of the loading sequence was not successfully quantified yet. The conclusion of the experiments is that compressive membrane action enhances the punching capacity of transversely prestressed thin decks subjected to repeated loads. 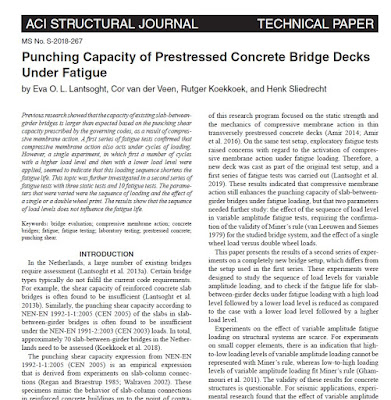 The abstract of the second paper is:
Previous research showed that the capacity of existing slab-between-girder bridges is larger than expected based on the punching shear capacity prescribed by the governing codes, as a result of compressive membrane action. A first series of fatigue tests confirmed that compressive membrane action also acts under cycles of loading. However, a single experiment in which first a number of cycles with a higher load level and then with a lower load level were applied, seemed to indicate that this loading sequence shortens the fatigue life. This topic was further investigated in a second series of fatigue tests with three static tests and ten fatigue tests. The parameters that were varied are the sequence of loading and the effect of a single or a double wheel print. The results show that the sequence of load levels does not influence the fatigue life.

One of my resolutions for 2011 was to start meditating…

I've been writing about finding more joy in the past,…

Self-care in Academia: a Work in Progress

Today I am inviting Jenna Townend to share her experiences…