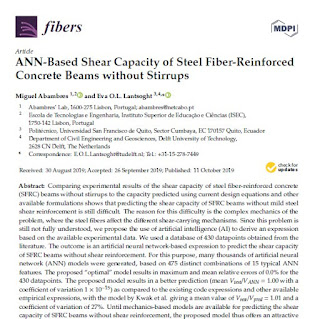 For the year 2019, Miguel Abambres and I won a Collaboration Grant from USFQ. The first paper from this collaboration is titled “ANN-Based Shear Capacity of Steel Fiber-Reinforced Concrete Beams without Stirrups”. It’s open access and published in the journal fibers. You can read the paper here.

The abstract is:
Comparing experimental results of the shear capacity of steel fiber-reinforced concrete (SFRC) beams without stirrups to the capacity predicted using current design equations and other available formulations shows that predicting the shear capacity of SFRC beams without mild steel shear reinforcement is still difficult. The reason for this difficulty is the complex mechanics of the problem, where the steel fibers affect the different shear-carrying mechanisms. Since this problem is still not fully understood, we propose the use of artificial intelligence (AI) to derive an expression based on the available experimental data. We used a database of 430 datapoints obtained from the literature. The outcome is an artificial neural network-based expression to predict the shear capacity of SFRC beams without shear reinforcement. For this purpose, many thousands of artificial neural network (ANN) models were generated, based on 475 distinct combinations of 15 typical ANN features. The proposed “optimal” model results in maximum and mean relative errors of 0.0% for the 430 datapoints. The proposed model results in a better prediction (mean Vtest/VANN = 1.00 with a coefficient of variation 1 × 10−15) as compared to the existing code expressions and other available empirical expressions, with the model by Kwak et al. giving a mean value of Vtest/Vpred = 1.01 and a coefficient of variation of 27 %. Until mechanics-based models are available for predicting the shear capacity of SFRC beams without shear reinforcement, the proposed model thus offers an attractive solution for estimating the shear capacity of SFRC beams without shear reinforcement. With this approach, designers who may be reluctant to use SFRC because of the large uncertainties and poor predictions of experiments, may feel more confident using the material for structural design.

Silver Linings: Meditation and Your Brain

While randomly browsing across interesting courses on iTunes university, which…

Yesterday I was liveblogging for TEDxDelft. As you can see…

I recently ran a poll on Twitter to learn which…